Greetings to the loyalists of Grip and Bend Italia, here we are to have everyone get to know people who are part of our sporting world more closely. Oceans and thousands of kilometers divide us, but in these spaces we are all as close as at a party!

Today we will have the opportunity to have a chat with a somewhat alien character, so out of the ordinary (when it comes to strength) that the deeds he performs are so unreal as to seem rigged! Yet the facts speak… while people chatter He destroys records! Here is Tanner Merkle! 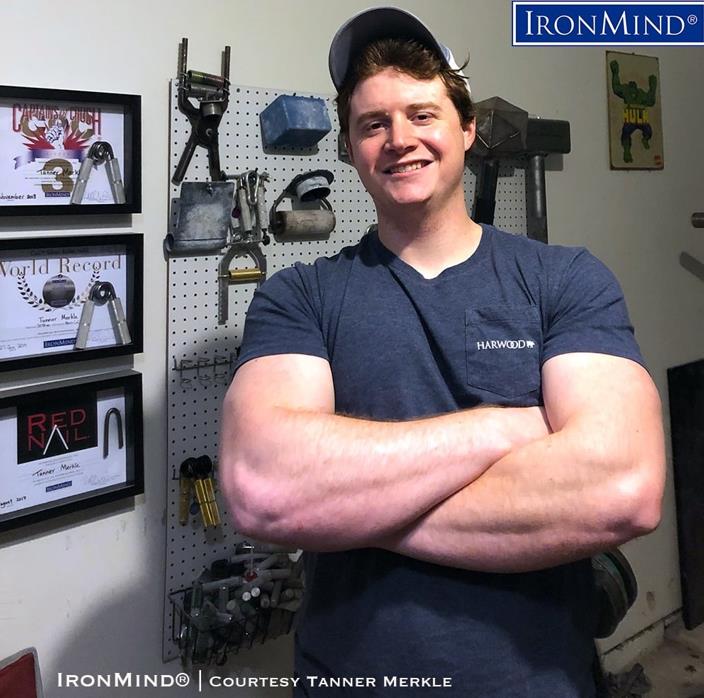 Hi Tanner and thank you for taking your time at GBI!

Let’s start with a ritual approach. Talk a little about yourself, where you were born, where you live and a description of your build.

My name is Tanner Merkle I was born in Dallas Texas, I am 183cm tall, weigh 99kg and am 28 years old. I live in Dallas Texas with my wife. I work as a respiratory therapist in the hospital setting.

What role did sport have in your life? Have you always been a dynamic guy?

I tried many generic team sports as a kid but was terrible at most of them. I discovered rock climbing in 2004 and quickly found myself competing at the national level. the hand and back strength required for the sport came naturally for me. I came in second at youth bouldering USA nationals in 2010. 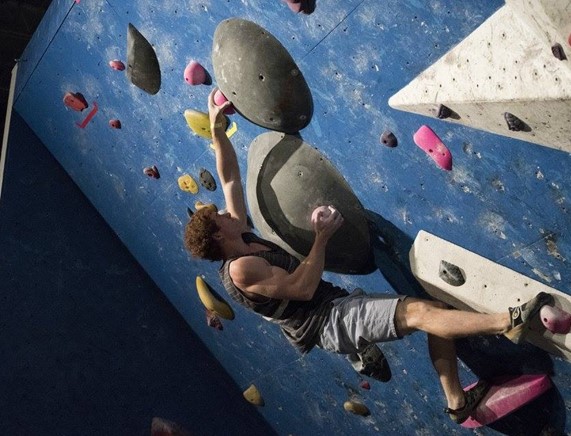 Your huge hands from whom did you inherit them? They look like they were designed for Grip Sport!

My dad is a huge guy standing 208cm tall. His hands are about the same size as mine at just under 22cm. I think I got my hand strength from him. Quick story: When he went to have shoulder surgery, the nurse tested his grip strength…it was the highest they had ever recorded. She even pulled the doctor into the exam room to make sure the machine was working properly. I recall him going to the gym after a long hiatus (virtually untrained) and rep 102kg on bench press 15 times easily. My grandpa was also quite strong and explosive. In his youth he was a runner up to represent the USA in sprinting at the Olympics. 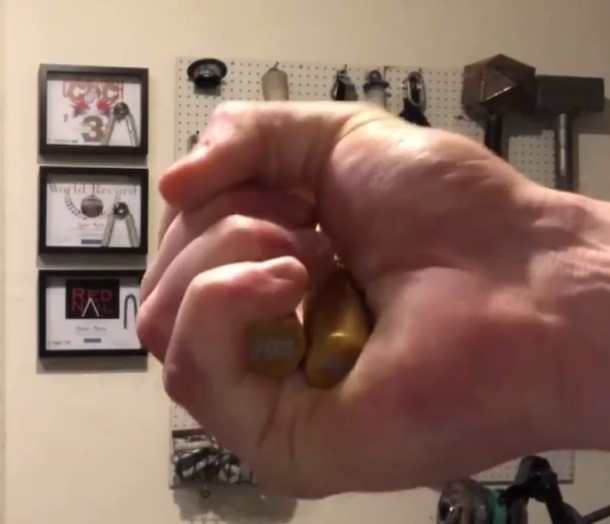 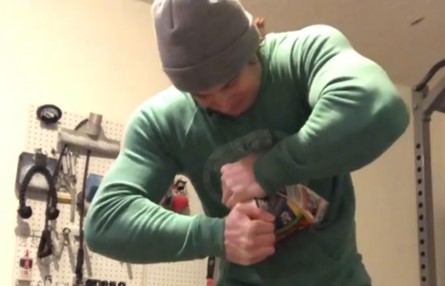 As a hand strength, do you think you have always been stronger than your friends since childhood, or is it a strength that you have developed thanks to climbing?

As a kid I was always the fastest on my sports teams, and like many of us involved in strength, I could beat my buddies in arm wrestling. I wasn’t much into weight training, but my ability to pull came so naturally and by 2010 I could do 10 consecutive one arm pullups. In particular my ability to do one arm pullups on door frames was unique. That was not something any of my friends could do at the time.

What led you to the world of Grip Sport? Has anyone noticed your potential, or was it you who intrigued you?

The way I found grip sport is kind of funny. Back in the early 2000’s my parents bought me a hand gripper to get strong because I was a “strong climber”….they bought me a 4 haha. needless to say I could not budge it. fast forward to 2016.  I suffered a terrible knee injury and could not climb for awhile. I remembered my old gripper and decided to buy a full set. I was able to close the 2.5 the first day I had it. I decided if I wanted to get better and close the 3, I had better learn how to train. I found the gripboard and started learning about gripper programs. I also learned about arm wrestling and sought out a local group of guys who practiced on the weekend. I met up with them one Saturday and had a fun time! they Had an Inch dumbbell in the corner of the room. I had heard of the inch but didn’t know much about it. Frankly I thought everyone there could lift it. I reached down and picked it up (not knowing that it was supposed to be really hard…and nobody there could lift it except one guy who could do it thumbless). The guy who owned it (Adam Irrgang) glanced over at me and was shocked to see I had just lifted it. I proceeded to lift it with both hands and then learned that despite my assumptions, I was the only one there who could lift it both hands in a full grip. After that I decided to focus on grip sport.

In your part of the country there are really strong people. You have often trained with Adam Glass or Robert Nejedly. How much have these people contributed to your training?

Right now I am so privileged to get to train with the team Texas guys. Adam, Robert, Tommy and Eric have a wealth of knowledge and we have all gotten stronger training together. Rob is an olde time strongman wizard, Adam is a jack of all things strength, Eric is a high level powerlifter, and tommy is a great arm wrestler and bender. Recently Isaac Newton and a crew from Oklahoma have been getting in on our competitions too. The high level of athletes around here and been helping me push my training. 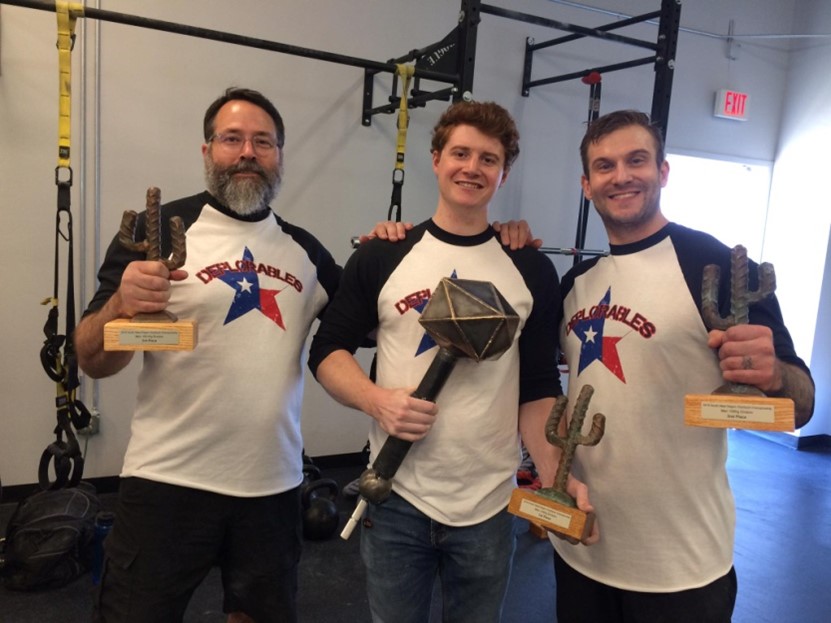 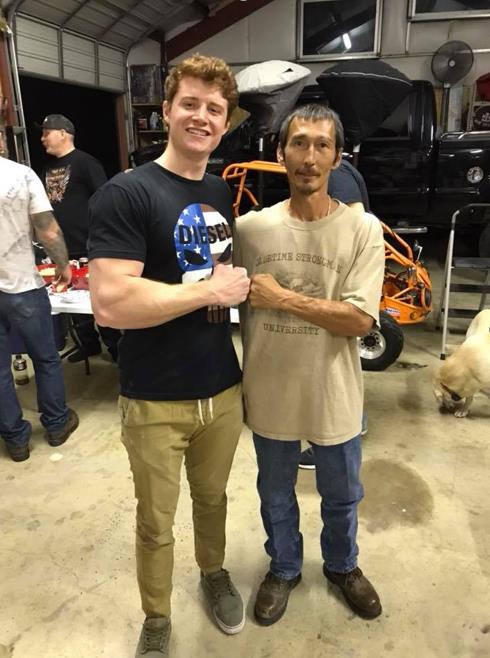 The loads you lift often leave the viewer speechless! In the past it also seems to me that some funny guy accused you of using fake weights, right? Did this make you nervous or laugh a lot?

Haha man I vaguely remember that fake weight guy….Don’t recall details though. Anybody who thinks what I do is faked in any way is free to come down to TX and train with me and the fellas. 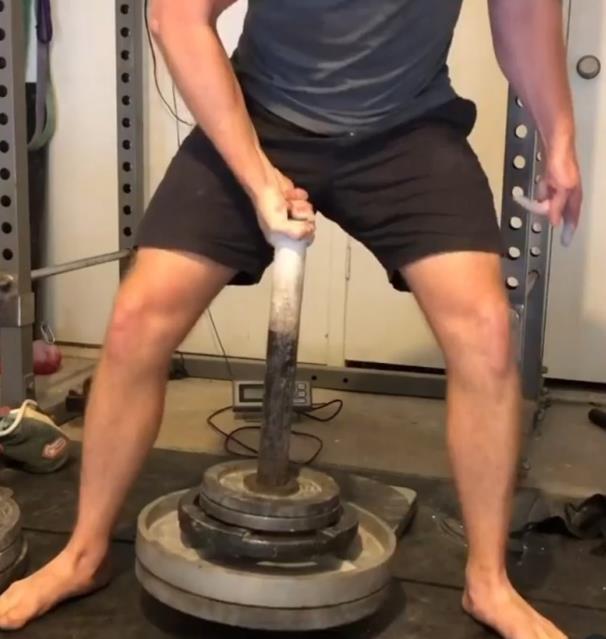 Let’s talk about your records now. Damn, I don’t know where to start! Thomas Inch, Red Nail, CoC 4 hold world record… what are your most important numbers?

I am proud that my CoC 4 SB hold record has held up so long. I am proud to have farmers walked Adam’s two 91kg Inch DB. Recently I hit 204kg on the axle in contest, continental cleaned the inch and certified on the CoC 3.5 gripper. There have been a lot of things I am proud of, but those come to mind for recent feats.

What do you consider important in strength training and for grip in particular?

Thickbar, thickbar thickbar. If you can only do one thing, do deadlifts on a thick 60mm axle. When in doubt, make your back stronger. Do weighted pullups, assisted one arm pullups, and pullups on grip implements.

What are the three exercises you would choose to create a phenomenal grip?

You participated in an armwrestling competition for WAL, what feelings did it give you? Will you try again with the AW?

I love AW. and competing in the sport is such an adrenaline rush. Some day I would like to do it consistently so that I get over the newbie pains. It is just so hard to train AW, rock climbing and grip all at the same time. 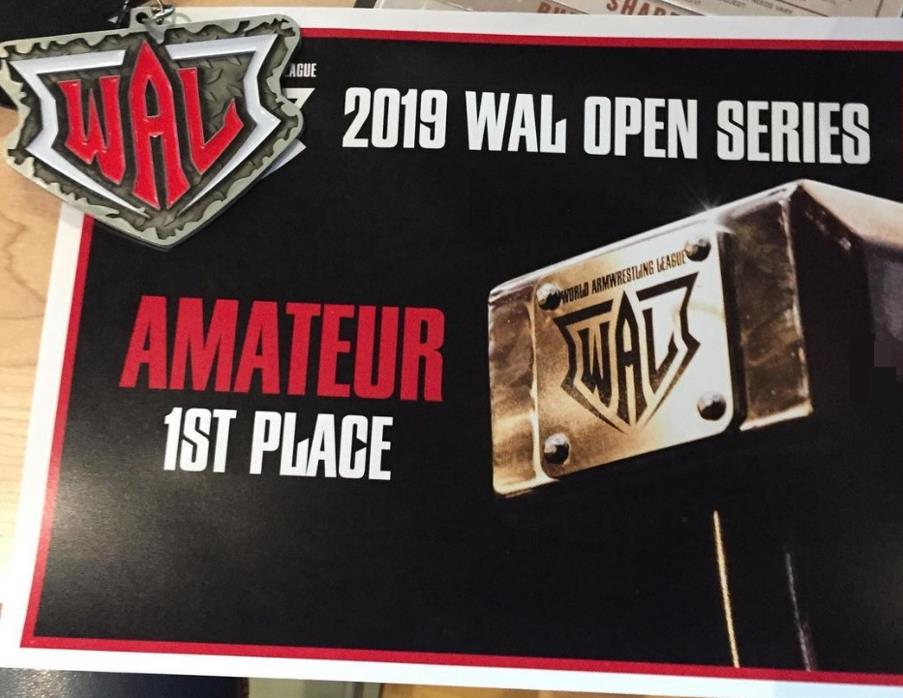 Did you participate in the Arnod Classic, what experience was it for you?

Competing at the Arnold in 2019 was an amazing experience. It was an honor to compete against numerous athletes from other countries. The Finns are a fun bunch. DO SOMETHING! (Arto Joronen shouted at each feat!) 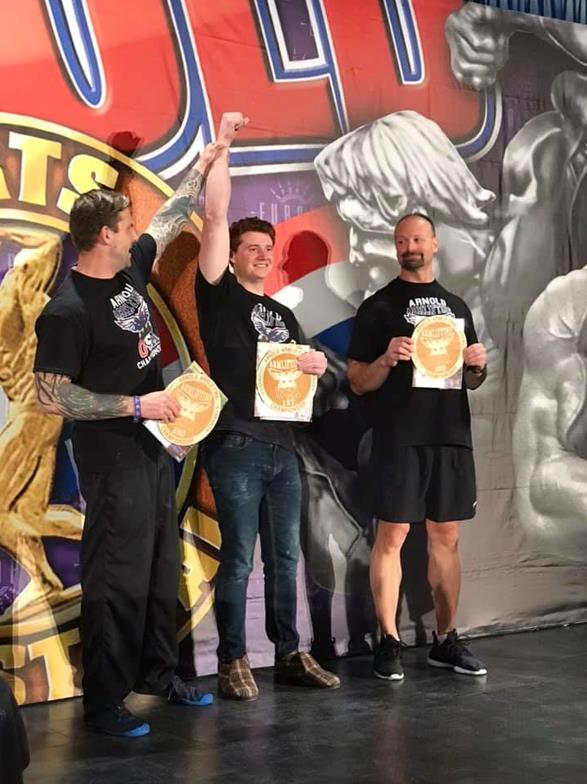 Do you have clear goals in your mind that you want to achieve and are working on?

I would like to keep pushing my axle number, I want to 20mm block set close a CoC 4, farmers walk a pair on inch dumbbells further and further and lift heavy at expos once the world opens back up.

I would ask you a thousand more questions, but I feel I have stolen too much time … Thank you so much for giving me this interview Tanner. Leave some records to Adam and the others, don’t be hated too much!