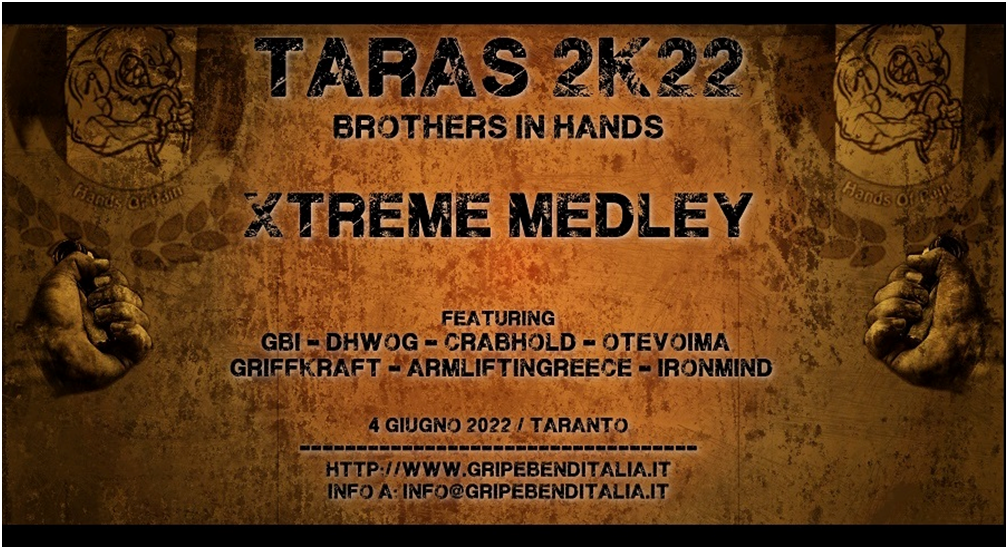 And we find ourselves competing again, after almost three years the GBI stage returns to its original location, the city of Taranto and therefore with the Taras Brothers in Hands 2022! After imposed social distances, fear of others, discrimination of all kinds, we finally find ourselves embracing ourselves in an atmosphere of celebration and sharing as few can be found in sports environments. Grip Sport, as we know, is a niche sport, but this characteristic seems to embellish its value and hold the participants in a circle of real and fraternal friendship.

A Taras contest organized shortly in advance causes uncertainty about the real freedom of movement due to the various government decrees. Many invitations and many absentees, due to the most varied needs of each one.

The most important absence, that of my partner Fabrizio Caracciolo who for serious health reasons could not be among us!

A few days before the start, new cancellations that apparently herald a lean and not very engaging race.

Ironically, the athlete Matteo Bolognini leaving the day before the race, encounters problems that will prevent him from taking the plane to Brindisi! Everything seemed to be rowing against the organization, but thanks to the indomitable will of Bolognini, who, bending over backwards, took the first Freccia Rossa Train, useful to descend towards Taranto!

So that, between Rome, Pescara, Bologna and Taranto, we gather around a table on the evening of June 3rd, raising glasses of beer for a toast in honor of the pre-race meeting!

Ready to give your best! 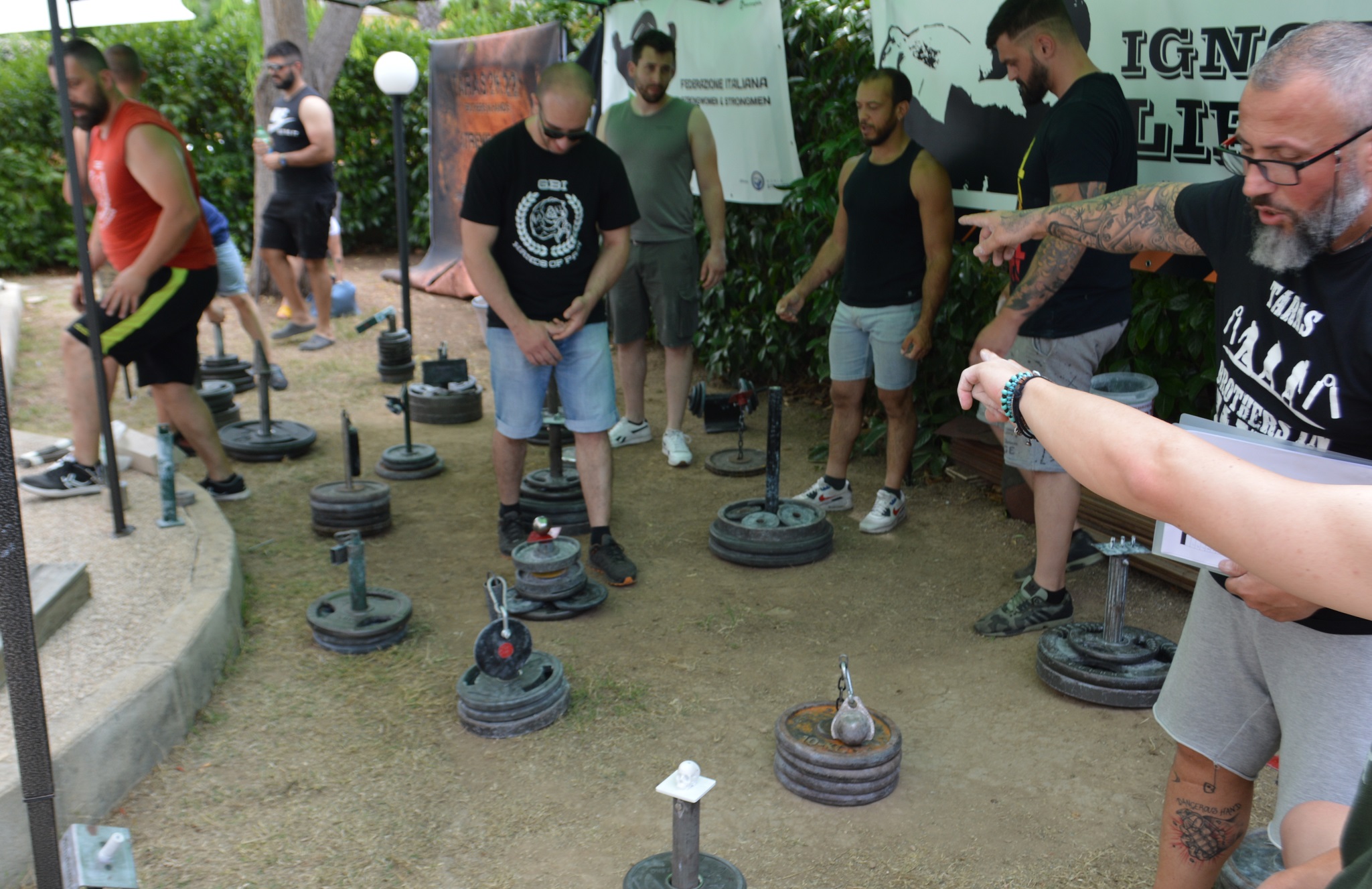 In the excitement of the last pre-race preparations, the adrenaline begins to be felt, but without nervousness, far from it, it is an adrenaline that releases euphoria and good humor!

The kilos of cast iron are stacked on the various loading bars and a medley that in some ways seems feasible, in other ways really leaves doubts about this feasibility, due, not only to the expected loads, how much of the time within which to succeed (5 minutes )!

For lovers of Grip Sport it is a true paradise that appears in front of their eyes! Present tools from many manufacturers from all over the world: GBI, Crabhold, Armliftingreece, Ironmind, Griffkraft, DHWOG, Otevoima, FBBC and then nails to fold and paper to tear! A real slaughter for the hands! 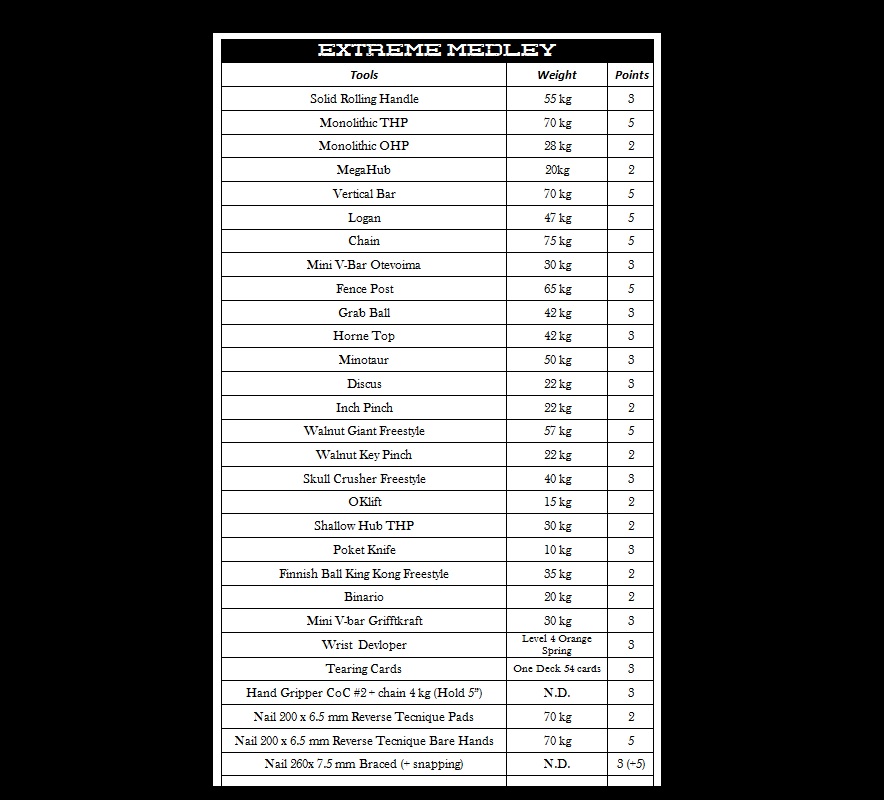 Ten competitors in a single category have created a truly engaging medley to experience but also to look at from the outside. Athletes who for the first time had to deal with truly devastating and elusive tools, who spent every drop of energy, right up to the last useful second, in an attempt to unplug tools that require not only strength, but also tolerance to pain and a technique to make the most of the lifting.

Loris Antonucci from the province of Pescara, an athlete from the world of Kettlebells, attacks every tool with determination and speed, with which he unfortunately will have to give up due to specific inexperience and perhaps due to excessive fatigue in the fast passages from one tool to another . He, however, demonstrating great tenacity and very strong wrists, succeeding in the bending feat.

Underlying the performance of Francesco Presicci, an athlete who has repeatedly shown remarkable qualities in the Grip Sport, but on this occasion he seems not to have been able to get the best out of his possibilities. I am sure in the future he will be able to be much more competitive, because he is within his reach!

At the same level, Fabio Campeggio and Giulio Elia, men with an important hand forged by hard work, who perform interesting lifts but also get stuck on lifts that require good confidence and experience, unfortunately resulting in some disappointments.

Excellent head-to-head comes from Stefano Paolini and Matteo Bolognini, who distinguished themselves for having raised really challenging tests, but both found difficulties in the Logan and in the Skull Crusher, but managing to conclude a good part of the medley.

Among the contenders for the title for this Taras Brothers in Hands 2022 surely the name of Gian Lorenzo Trabucco was squashed, an athlete from Abruzzo who always distinguished himself for the considerable strength of his hand, especially when it comes to climbing in an important way with loads.

Trabucco finished the medley almost entirely, leaving little evidence behind, including the Logan and the Skull Crusher, two tools that are loved and hated at the same time for their propensity to get out of hand and leave the pain behind as the only result!

Three athletes remain to compete for the podium, leaving everyone present with bated breath until the final result. Three athletes who have had a similar performance in managing the medley. Nico Oliveto, who literally attacked with enthusiasm and determination every single step foreseen in the twenty-nine tests, missing the lifting of the Logan by a whisker, but winning five extra points for being the only one to break the big nail in the braced bending! 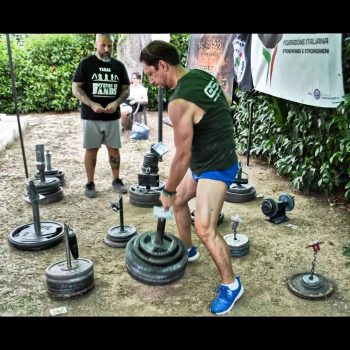 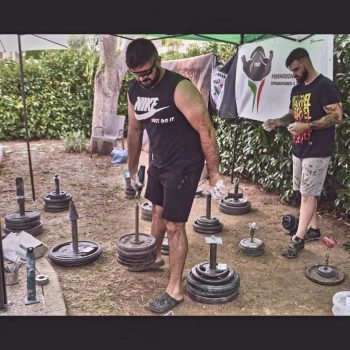 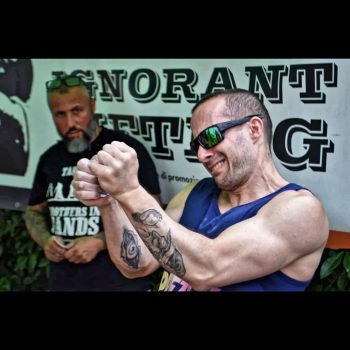 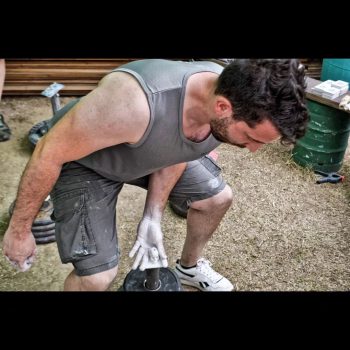 Excellent performance by Giorgio Giannico, the only one together with Manuel Pieroni who managed to complete the entire medley, but arrived with difficulty in the final seconds with the attempt to break the big nail, but the chronometer won first, decreeing the test of unfinished snapping!

Disarming, however, was the race held by the Roman hurricane, Manuel Pieroni, who seemed more engaged in a treasure hunt than in a lifting competition! Maybe a gravity-canceling spell, or simply a much higher level. The fact is that the weights instantly seemed to be empty, lifted with ease and in total relaxation. Accumulated only a bit of fatigue in the final phase, the only effort made by Hurricane was felt while holding the chain (weight 4 kg) with the Gripper CoC # 2.

And therefore, during the calculation work carried out by Virginia Caroli, now the backbone of GBI race data management, the result is photo-finish! The first three places equal points !!! Wins the Taras Brothers in Hands 2022 Manuel Pieroni, with 90 points but with a shorter time for finishing the medley almost a minute before the expected 5 minutes! Followed in second place by Nico Oliveto, a great fighter with character, who closes a literally dominated medley at 90 points and wins over Giorgio Giannico’s third place (90 points for him too!) For a lower body weight!

A truly engaging, fun and rich in different qualities medley that brought out strength, endurance, stubbornness and pain tolerance in the hands of those who took   part! 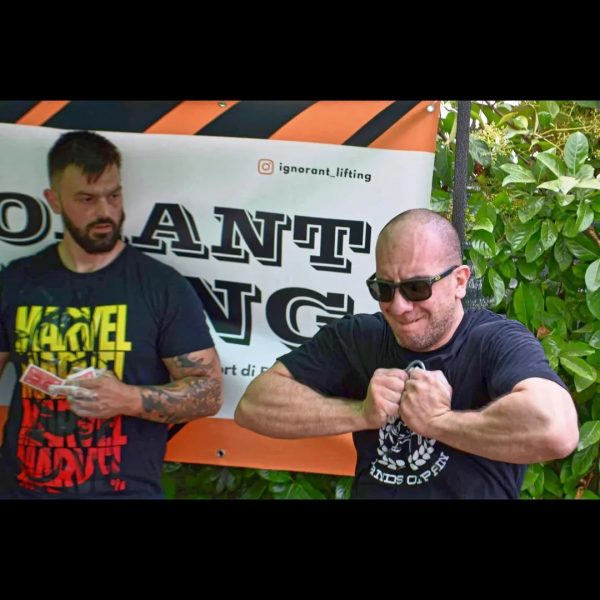 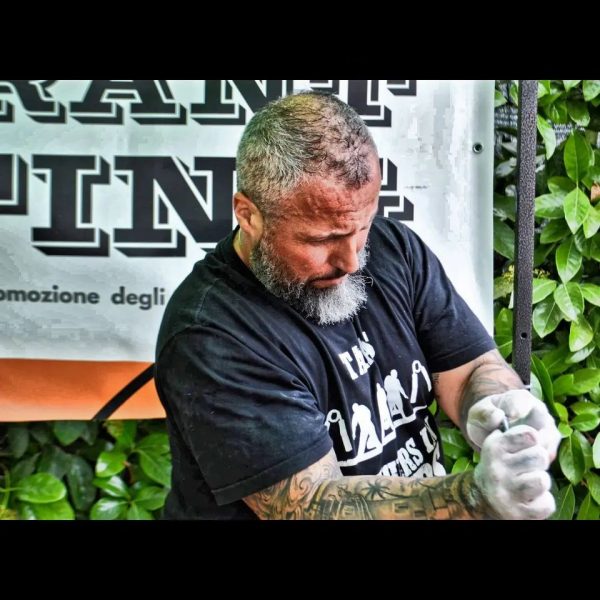 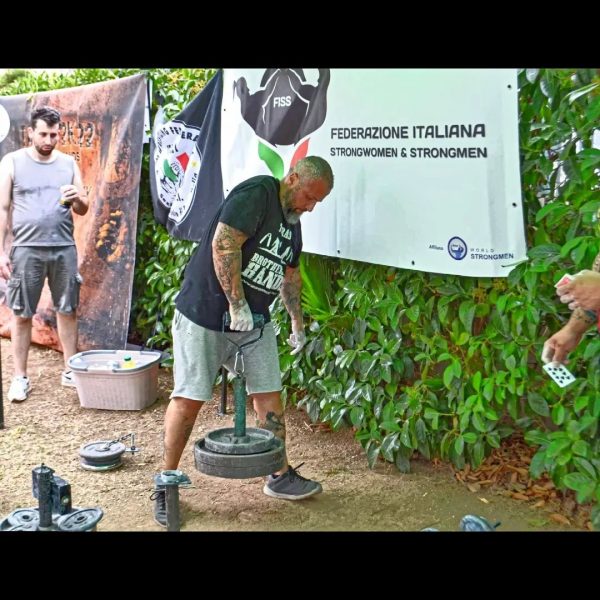 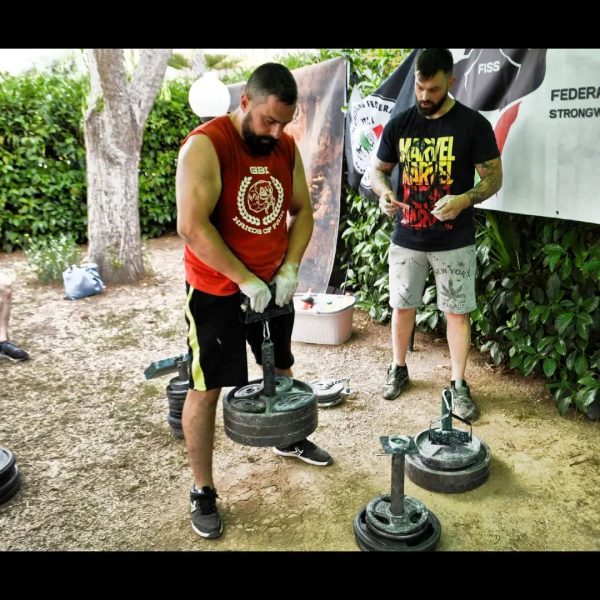 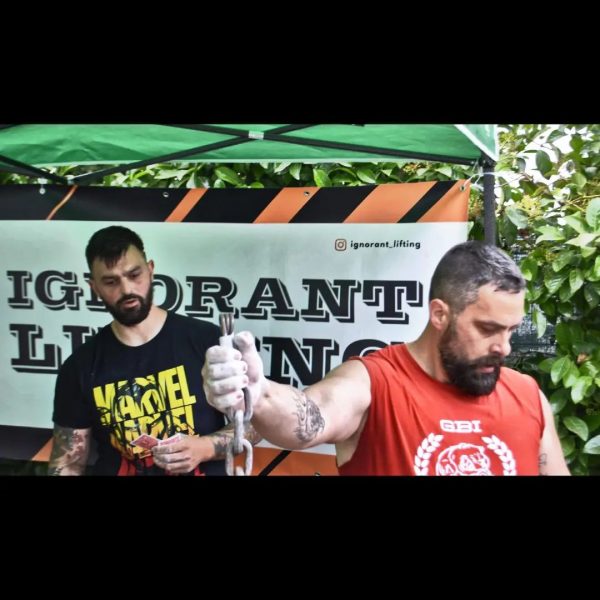 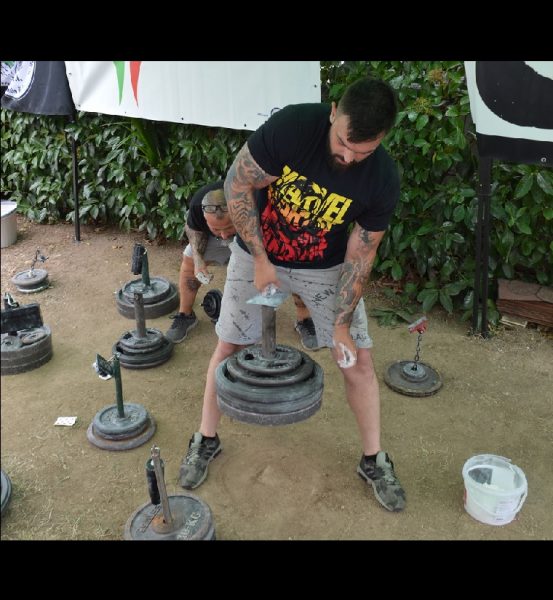 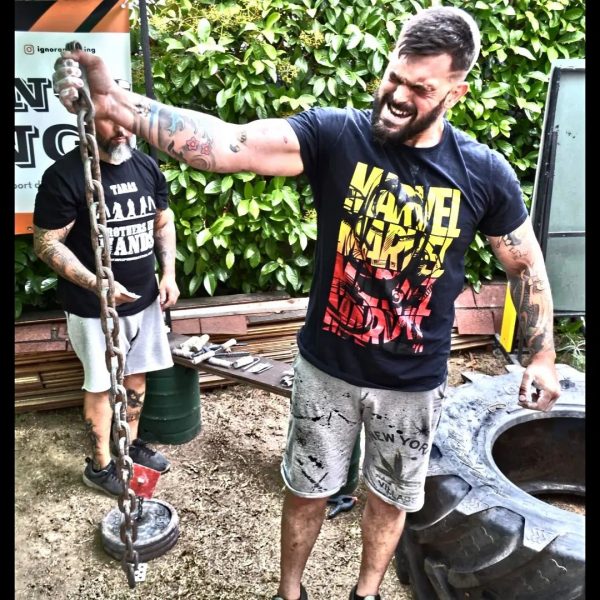 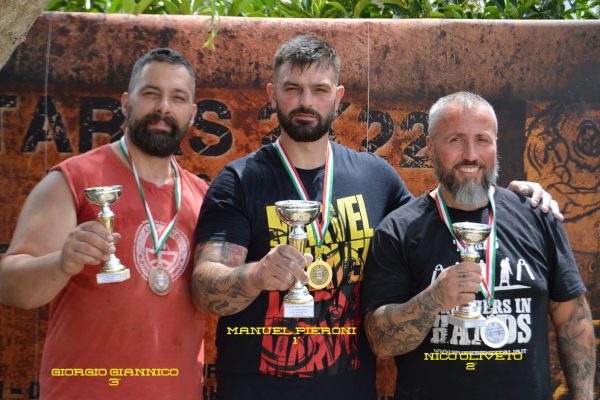 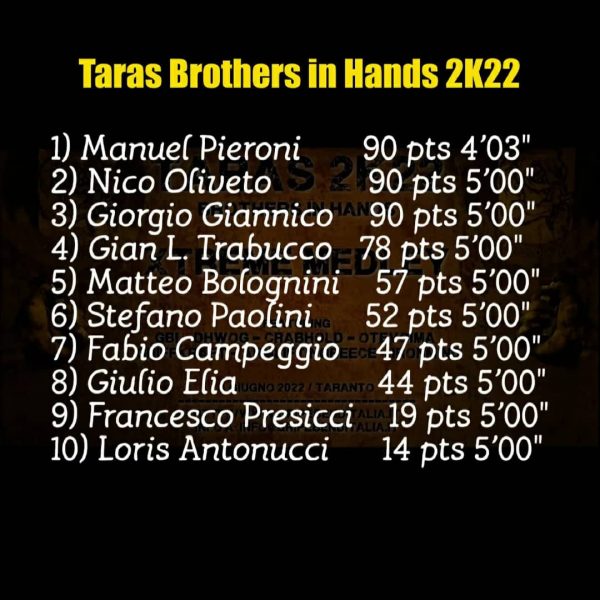 A race that was like oxygen on fire for everyone. He has renewed the vigor of the fire that burns for our passions. In each of us, reflections have arisen about our own limits, about being able, and having to, do more. Above all he left the smile and satisfaction given by the encounter, comparison and profitable sharing.

Thanks to my wife Virginia Caroli who is a lifeline ready for anything. Indispensable organizer and accountant of the competition.

Thanks to the fraternal Nico Oliveto who banged himself and made loads of tons of cast iron, always ready to lend a hand … even two!

Thanks to Marco De Pace for the splendid photos that will be an indelible memory.

Thanks to Fabio Campeggio (Ignorant Lifter) for the support and the sponsor.

Thanks to Manuel Pieroni, Matteo bolognini, Gian Lorenzo Trabucco, Stefano Paolini and Loris Antonucci for having faced a long journey to be present and bring prestige to this day.

Thanks to Francesco Presicci for the extra cold and crunchy beer!

Thanks to Loris Antonucci for the laughs and the lightheartedness

Thanks to those who came in support, to drink and eat with us!

Thanks also to those who wanted to be there but couldn’t come and supported us even with just a thought.

Sorry for those who missed a great opportunity. 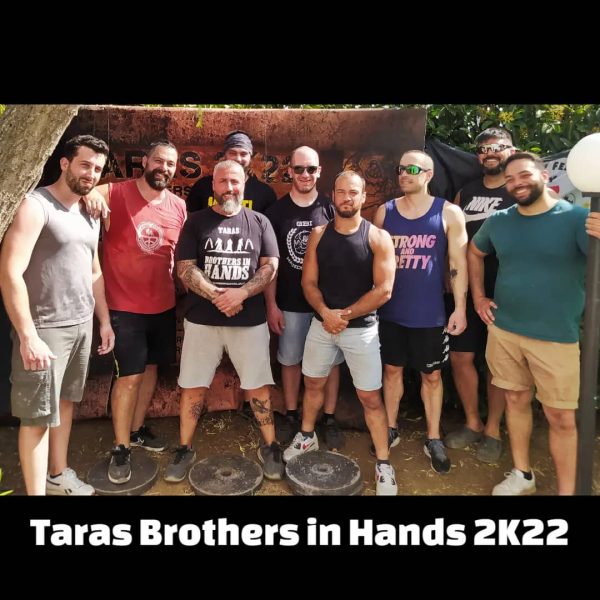 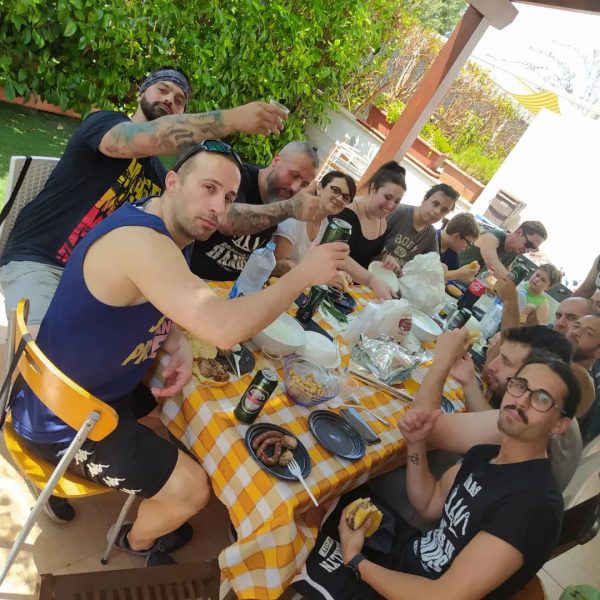 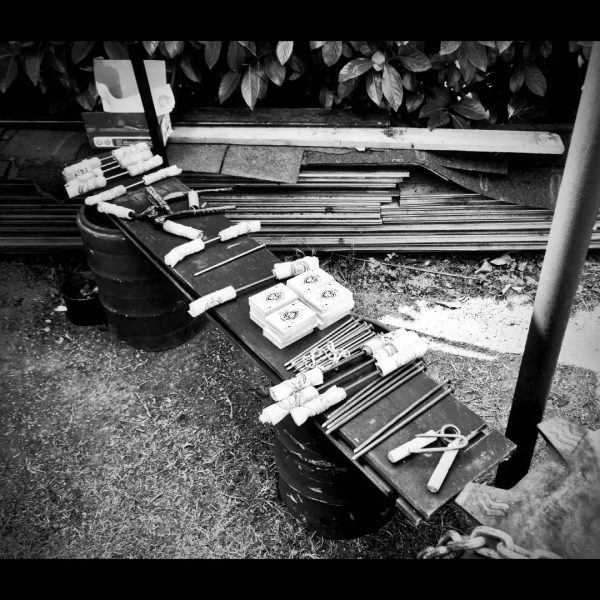 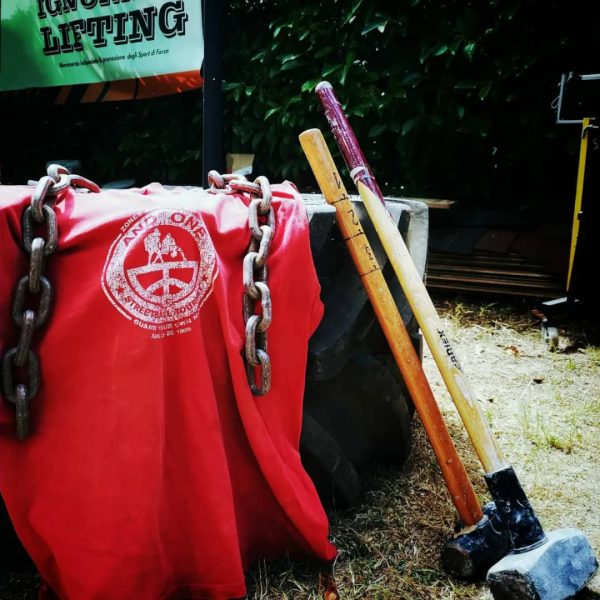 This site uses Akismet to reduce spam. Learn how your comment data is processed.

Armwrestling Workshop by Ermes Gasparini. We [...]

Strengthen your grip for martial arts

Taking advantage of the great potential offered by[...]